During the disintegration of Yugoslavia, the war started in 1992 when the Serbs and then the Croats attacked Bosnia and Herzegovina to invade and lasted until 1995. The Dayton Agreement was signed in 1995 with the initiatives of the European Union and the USA. In this way, Bosnia and Herzegovina are divided into regions as Serbs, Bosniaks, and Croats. In the war that lasted for more than three years, the invaders killed hundreds of thousands of Bosnian citizens in a planned and systematic way and expelled many people from their homes. During this war, the Serbs committed the greatest brutality in Srebrenica, in a place where the UN called the Safe Zone, where the UN was taking many Bosniaks under protection in this region. The Srebrenica Massacre is one of the biggest massacres after the Second World War. Hundreds of thousands of people in the middle of Europe were murdered, tortured, and most of them expelled. The fact that the United Nations has remained silent while all these events continued to be a matter of debate today. Those responsible for the massacre were caught and brought to court. However, it seems unlikely that the wounds of this inhumane event in Srebrenica will be healed, and it is not an event that can be easily forgotten. Although 26 years have passed since the Srebrenica Genocide, 19 people whose identification was completed in July 2021 were buried.

Yugoslavia is a country located in the west of the Balkans and bordered by Hungary in the north, Romania, and Bulgaria in the east, Bosnia-Herzegovina and Croatia in the west, and Albania and Macedonia in the south. With the disintegration of the Austro-Hungarian Empire, Serbian, Croatian and Slovak empires were declared in these lands  (Pehlivan, 2019, s. 6855). As a result of the ethnic conflicts that started between the Serbs and Croats in 1930, Prince Alexander declared a dictatorship and the name of the empire became Yugoslavia. As a result of the elections held after the exile of the royal family, communist leader Josip Broz Tito came to power. Thus, the People’s Republic of Yugoslavia was proclaimed.

Although it was under the Nazi occupation during the Second World War, it was able to control the conflicts that may arise in a country where many religions and races live together, with socialist policies and sharing  (Pehlivan, 2019, s. 6855). In 1980, after the death of Tito, Yugoslavia began to experience great problems within itself. The deterioration of the economy and the increasing ethnic unrest started to increase the problems in the country. In addition, the world economic crisis experienced in the same year seriously affected Yugoslavia and the lack of economic development among the republics was one of the biggest problems. The newly developed countries such as Slovenia and Croatia managed most of Yugoslavia’s budget, which led to the impoverishment of other republics such as Bosnia, Macedonia, and Kosovo. In the table below, the Gross Domestic Product of Yugoslavia between 1980-89 is given (in US dollars), (Figure-1). 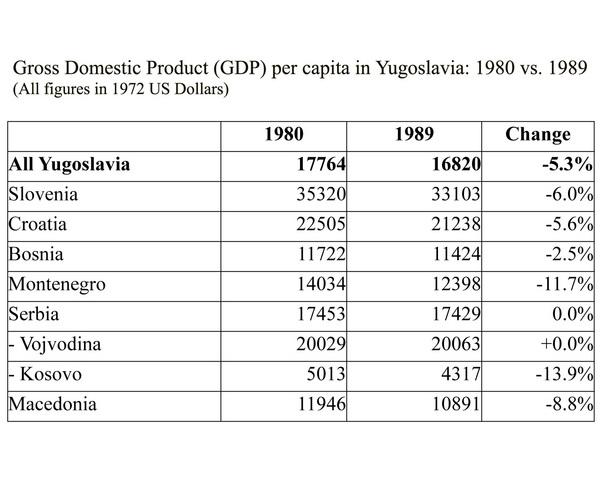 All these economic hardships have helped to increase ethnic and religious conflicts. This economic crisis and unemployment have led to an increase in nationalism, especially in underdeveloped countries such as Kosovo and Macedonia. For example, Muslims in Bosnia and Herzegovina claimed that they have a separate national identity. While the Albanians in Kosovo wanted to separate and unite with Albania, the Montenegrins preferred to act with the Serbs  (Pehlivan, 2019, s. 6857). While communist rule continued in Montenegro and Serbia in 1990, other republics were ruled by non-communist governments.

2.1. Beginning of the Bosnian War

After declaring its independence, the struggle for power between the groups within Bosnia-Herzegovina started and the Serbs who wanted to take advantage of this opportunity started preparations. After the independence of Slovenia and Croatia in 1991, the Yugoslav Army and the irregular Serbian army attacked and displaced the indigenous population. The Serbs started bombing Bosnia and conflicts between Serbs and Muslims intensified in many parts of the country  (Sander, 2013, s. 580). The Bosnian War began unofficially when the Bosnians, whose population was mostly Croats at that time, attacked the village of Ravno (Yordamoviç, 2021). On January 9, 1992, the Serbs declared their autonomous regions in Bosnia, “Republika Srpska-Bosnia-Herzegovina”. This situation created great controversy and caused the civil war to grow. In the town of Bijeljina, located in the northern parts of Bosnia, the Serbs killed about five thousand people and carried out their first massacre. Then they turned to other towns where Muslims are the majority. The Bosnian Serbs, armed by the Yugoslav army under the command of the Serbs, started the genocide against the Muslim Bosnians. Under the leadership of the Bosnian leader Alija Izetbegovic, the Bosnians fought against the Serbs and Croats. By 1992, most of Bosnia and Herzegovina came under Serbian rule. The United Nations sent peacekeepers to the war zones and bombed Serbian positions with the authority of NATO.

The United Nations has created a Safe Zone in Bosnia to protect Muslims against Serbian attacks. They first declared Srebrenica in April 1993, then Tuzla, Zepa, Sarajevo, Gorazde and Bilhaç as safe zones  (Vatansever, 2011, s. 4). While the population of Srebrenica was 26,000 before the war, the population increased to 40,000 after the UN’s Safe Zone decision, and the UN sent about 600 soldiers to the region and took it under protection. In fact, the UN should have sent 34,000 troops to all safe zones, but only 7,600 were sent. On 6th July 1995, Serbs surrounded Srebrenica. Three days later, the Serbs entered the city, took 30 Dutch soldiers hostage in the watchtowers, and used them to bargain against the Muslim Bosniaks  (Pehlivan, 2019, s. 6858). While all this was going on, NATO did not intervene. On 10th July, the UN approved the request for airstrikes and the Serbian attacks stopped for a short time. However, despite receiving approval, NATO planes could not come to the region on the grounds that their fuel was exhausted, and they stated that they went to Italy to refuel. However, according to the documents revealed by the BBC in 2015, it was claimed that the USA, France, and England were condoning the events in the region with the secret agreement they made (Özkan, 2015). On July 11, when the Serbian troops did not withdraw, hence 2 Dutch F-16s bombarded the Serbian positions, and upon this, the Bosnian Serbs said they would kill the Dutch soldiers they held hostage and opened fire on the refugee camp  (Pehlivan, 2019, s. 6859). Ratko Mladic entered the city and agreed with the Dutch General that the weapons should be surrendered to ensure the lives of the Muslims. They took action when the Serbs completely captured Srebrenica. Women and children were put on buses to be sent to Muslim regions (camps). The men were considered war criminals and imprisoned in trucks and warehouses, and many were killed. Those who tried to escape were killed on the spot. Some of the women were confined to their homes in Tuzla and were subjected to attacks by Serbian soldiers. The corpses were transported by Bosnians and buried in mass graves or thrown into the Drena river. In the middle of Europe, in front of the eyes of the whole world, 8300 people were brutally killed in the massacre.

After the Srebrenica Massacre, the voice of the international community and the UN began to rise more. The European Union and the USA, which could not prevent the events from reaching this level, forced the parties to peace. In fact, NATO carried out an airstrike on August 30, 1995, because diplomatic means had not worked. Thereupon, Serbia was persuaded to negotiate peace. The Dayton Peace Agreement has the purpose of stopping the war, preventing deaths, and taking measures to prevent similar events from happening in the long run. The Dayton Peace Treaty was formally signed in Paris on 15th December 1995. According to this treaty, the state of Bosnia and Herzegovina was established as two separate regions: the Federation of Bosnia and Herzegovina, and the Republika Srpska. Both two regions have independent and separate administrative and political mechanisms. International institutions have been established for the continuation of the treaty in the future.

In 2004, the UN International Criminal Tribunal (The Hague Tribunal) ruled that the Srebrenica massacre was genocide. In 2007, the International Court of Justice decided that what happened in Srebrenica was a genocide, because it aimed to destroy an ethnic and religious group. Wanted criminals by the UN for war crimes, Ratko Mladic could not be caught for 16 years. Mladic was caught in Serbia in 2011 as the International Criminal Court stepped up its pressure. On 22 November 2017, the court found the “Bosnian Butcher” guilty of 10 of the 11 crimes against which he was tried and sentenced to life imprisonment for crimes against humanity and violating the laws of war  (Pehlivan, 2019, s. 6861).

26 years ago, 8,300 Bosnian Muslims were brutally murdered, displaced, and their lives were ruined in the middle of Europe. The Srebrenica Genocide has been one of the failing courses of the world community after the Holocaust, both on a political and humanitarian scale.

While Muslims were the majority in Srebrenica before the genocide, today they have become a minority and Serbs have become the majority. In 2013, Serbian President Nikolic apologized for the mistakes they made but did not accept the genocide. However, later, the images of the Serbian general giving a gift to the Dutch General, who evacuated the city, emerged. In 2017, the Dutch Court ruled that the Dutch soldiers acted illegally in connection with the massacre and found the Dutch soldiers guilty.

Prepared by Sudenur Yıldız for The FEAS Journal.