Ever can’t help thinking about why the Turkish Lira doesn’t appear to stretch as far as it is used to? The explanation is quite simple: It’s less valuable. In summing up the situation, Mahfi Eğilmez’s, a well-known Turkish economist who graduated from Ankara University, tweet is striking. He states that the Turkish lira has depreciated by 30% in a period where major countries’ currencies i.e. Euro, Yen, Pound, Canadian Dollar, Swedish Krona, and Swiss Franc gained value against the dollar.

With the outbreak of the COVID-19, all countries including Turkey have experienced unprecedented circumstances in which finding a desired policy that contributes to a nation’s economy is demanding, inasmuch as the uncertainty caused by the ‘unknown’ infection immediately upset the global trade, and constrained global organizations to take basic choices with limited information. The majority of the multinational firms have either partially or permanently suspended their branches to cut down on expenditures, which brought about insurmountable economic crises in such countries as Turkey. The coronavirus initially came out in Turkey on 11 March 2020 when the dollar exchange rate was about 6,10. After the ensuing 8 months, the value of the Turkish lira has undergone 29% decline, penetrating to practically 8,55, which means that TRY has positioned at the bottom of the basket concerned with all major currencies. 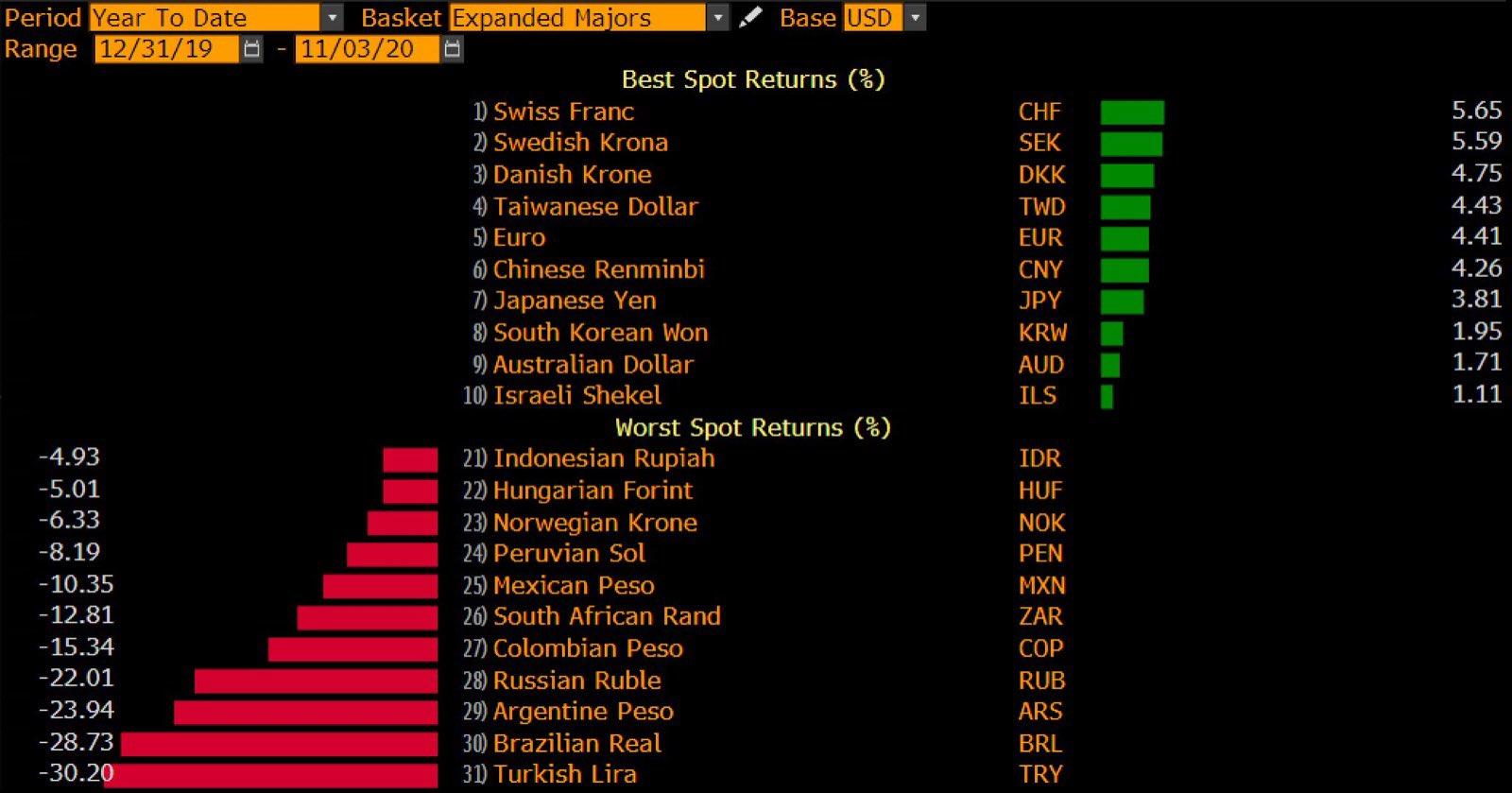 According to the announcement published by the Monetary Policy Committee, the Central Bank preferred to keep the interest rate constant, which gave rise to hastily decline in the value of the Turkish lira (from 7,83 to 7,96 between 22 and 23 October). The committee has stated that in order to control inflation expectations and limit the risks to the inflation outlook, substantial recovery was needed to achieve in financial conditions by taking necessary steps within the scope of monetary policy and liquidity management. The Central Bank’s unexpected decision to keep interest rates on hold was aimed at stimulating a decline in the country’s risk premium and strengthening recovery in the economy. Interest rate expectations, meanwhile, were that it would shift from 10,25% to 12%, however, the committee has decided to boost the flexibility in the liquidity management while keeping the policy rate unchanged, in line with pioneer opponent of high-interest rate, President Erdogan. Behind President Erdogan’s desire for lower interest rates lied in the notion of keeping growth high and reducing unemployment. But most Turkey-watchers are of the opinion that Erdogan has negatively influenced the Central Bank, which is expected to operate autonomously. As a result, both citizens of Turkey and international investors have lost confidence towards the independence of the Central Bank of the Republic of Turkey, leading to keeping savings in foreign currencies instead of TRY (BBC Turkish, 2020).

Although at first sight, Erdogan’s argument is not seen as a bad idea considering the unemployment problem endured by the COVID-19 pandemic, steps taken by the Monetary Policy Committee ought to be considered broadly not to confront a situation in which the value of the Turkish Lira relentlessly continues to abate.

As things stand, novel and perceptive amendments must be on the road to cope with formidable conditions that Turkey has experienced for months, which entails decent economic policies announced by the Central Bank. Otherwise, Turkish people might well face the reality of far more dramatic drops to come as the Turkish lira value continues to fall.

STAGGERING DECLINE IN THE VALUE OF THE TURKISH LIRA